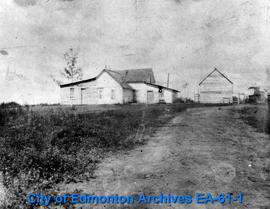 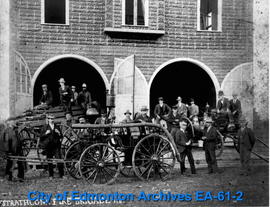 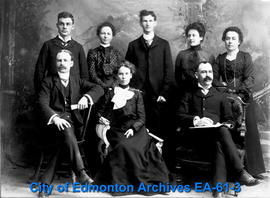 Grace Martin was born in Quincy, North Dakota in 1879, the eldest of eleven children of David and Margaret Martin. The Martin family moved to South Edmonton in 1899 where they purchased 320 acres of land.
Grace Martin was the first teacher at Oliver School, which was the first school in the Ellerslie district.
In 1903 Grace taught school in Leduc where Donald C. McEachern was principal. Grace Martin and David McEachern were married in 1904 in Strathcona.
In 1972, the Edmonton Public School Board opened the Grace Martin Elementary School in the neighbourhood of Millwoods in her honour. Grace was the guest of honour at the opening and five of her former pupils were able to attend.
Grace Martin McEachern died in 1988.

The fonds consists of programs and brochures relating to the opening of Grace Martin School, as well as a biographical sketch of Grace Martin McEachern.
The photographs include the Martin farm where Grace grew up, Strathcona teachers including David McEachern and the Strathcona fire brigade.

This fonds was donated to the City of Edmonton Archives by Grace McEachern in 1969 and 1973.

The material was arranged according to the filing system of the creator.
The photographs were assigned item numbers with the prefix EA-61.