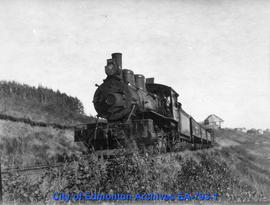 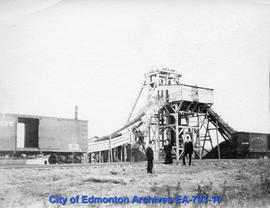 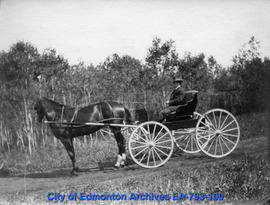 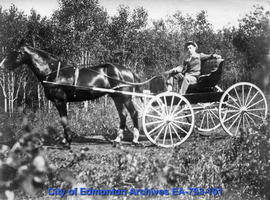 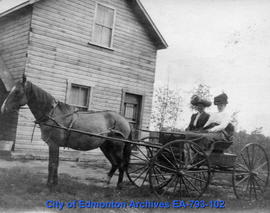 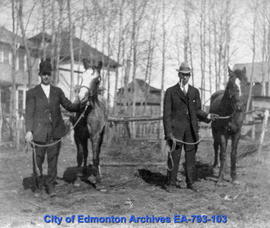 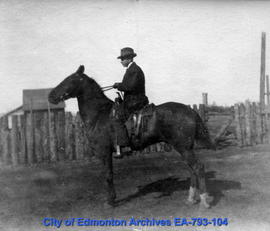 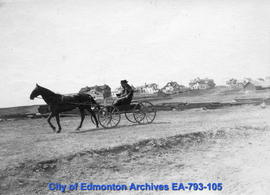 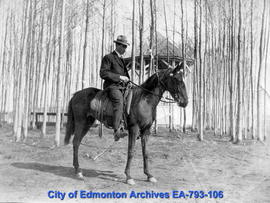 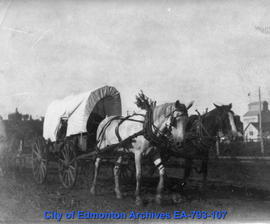 Gordon Wilkins was born 26 Jun 1886 to Harriet and Richard Wilkins in York (Toronto), Ontario. By 1909 Gordon was in Edmonton working as jeweler and watchmaker at Kline’s Jewelry and he was boarding at 547 Clara Street.

Gordon married Edna L. Tomlinson in Edmonton in 1912. They had two children, Wayne and Lenora, and the family moved to a home near 105 Avenue and 102 Street. By 1921, Gordon and Edna divorced. Gordon moved to Toronto, Ontario with the children, and Edna remained in Edmonton.

Gordon married Kathleen Jacob on 1 Jan 1924 in Toronto, Ontario. Gordon and Kathleen had one son, Ross.

Vera Wilkins was the daughter-in-law of Gordon Wilkins.

The fonds consists of photographs taken by Gordon Wilkins. The images are of early Edmonton, including unidentified people who may be members of the Wilkins family, houses, horses or horse and buggy, mining activity, John Walter’s ferry, Indigenous peoples and other events in Edmonton. It also includes photos of Gordon working at Kline’s Jewelry and the Kline family.

This fonds was donated to the City of Edmonton Archives by Vera Wilkins in 1995.

The material was arranged by the archivist in chronological order. The photographs were assigned item numbers with the prefix EA-794.