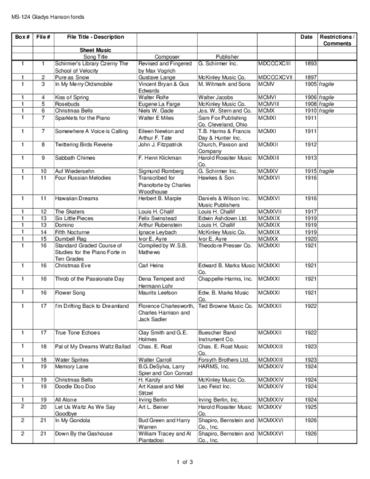 Gladys Lillian Jones was born in Edmonton in 1912. Her father William M Jones immigrated to Canada in 1906 or 1908 and worked at the City Incinerator (later known as the Rat Creek Incinerator). Her mother, Lily, immigrated to Edmonton from England in 1906 aboard the “Parisian” along with her grandparents, Marshall and Jane Hanson, and her siblings Herbert, Albert and Sydney Jones. Gladys worked as a stenographer, phone operator and clerk for various Edmonton businesses including Weber Bros., Tighe & Wilson and Gillespie Grain. Gladys had a strong interest in music, likely inherited from her mother.

Gladys married Wallace O. Hanson in 1938 in Edmonton. They had two children, Marie and Gary. In 1950, Gladys and Wallace were the proprietors of Hanson’s Stationery at 10625 – 95th Street, Edmonton. In 1955, Gladys began working for the City of Edmonton in various departments, including the Power and Recreation departments.

Gladys Jones Hanson died 16 Oct 2010 and is buried at the Beechmount Municipal cemetery in Edmonton.

The earlier song books and sheet music (pre 1906) belonged to Gladys' mother and were brought over from England when the family emigrated.

This fonds was donated to the City of Edmonton Archives by Gladys Hanson in six donations made between 1969 and 1995.

The material was arranged by the archivist in chronological order.
The photographs were assigned item numbers with the prefix EA-232.

Some material is fragile, access copies have been made for the following and are included in the fonds with the original: