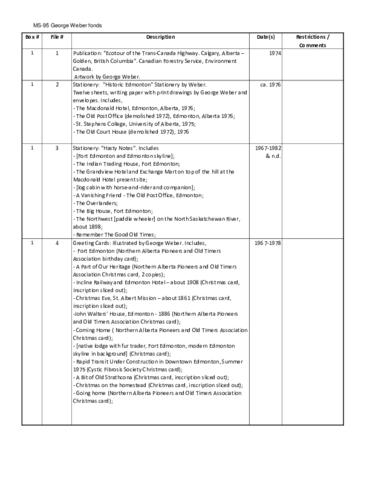 George Weber was born in Munich, Germany in 1907. As a draughtsman, he trained in wallpaper design and display. He immigrated to Canada in 1929 and first settled in Toronto. He worked as a wallpaper designer and studied composition, colour and commercial silkscreen at the Ontario College of Art. He moved west during the Depression, working on farms before moving to Edmonton AB, where worked as a commercial printer for the Hamly Press and Reliable Printing. Weber lectured on the silkscreen process (serigraphy) at the University of Alberta in 1948 and in the early 1950s led workshops at the Edmonton Art Gallery.
He was a founder of the Edmonton branch of the Canadian Painters and Etchers and served as president of the Federation of Canadian Artists. Weber was one of the first Canadian artists to use silk-screening techniques as a fine art form. His silkscreen prints and watercolours became increasingly popular in the 1970s and 1980s.
In 1985 his serigraph of Moraine Lake was chosen by Canada Post for the $2.00 stamp commemorating the centennial of Canada's National Parks. He was represented by Canadian Galleries and ARTrageous Gallery in Edmonton, AB, and Canadian Native Prints in Vancouver, B.C. In 1976 he received the Edmonton Historical Board’s Recognition Award for his sketches and watercolours of historic buildings and sites in Edmonton.
He married Doris Evelyn ? and they had three children, Evelyn, Donna and Carol.
George Weber died on 26 Apr 2002 in Edmonton, Alberta.

Donna Tingley is the daughter of George Weber.

This fonds was donated to the City of Edmonton Archives by George Weber in six donations made between 1976 and 1993 and by Donna Tingley in 2000.

The material was arranged by the archivist by type of record and then in chronological order.
The photographs were assigned item numbers with the prefix EA-258.