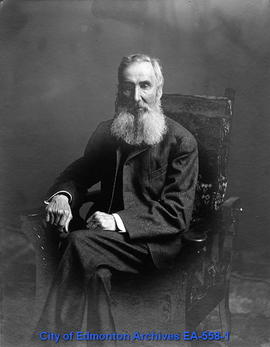 George Johnstone Kinnaird was born on 10 Jun 1855 in Dundee, Scotland to Jean Johnston and David Kinnaird. He was one of four children. His siblings were David, Margaret and Agnes.
He was apprenticed to the Hudson’s Bay Company in 1875. He served for ten years at Oak Point, Manitoba, Manitoba House and Fort Ellice NWT and was transferred to Edmonton, Alberta District in 1886.
George married Kate Anne Garnett on 8 Oct 1889 in Edmonton. They had three children - George, Jessica and Thomas.
He left the Hudson’s Bay Company in 1900 to work for the Town of Edmonton as Secretary-Treasurer and was subsequently City Commissioner. He resigned in 1908 to enter private practice, ultimately with the auditing firm of Kinnaird and Henderson.
George J. Kinnaird died in Edmonton, Alberta on 3 Nov 1922. Kate Kinnaird died 10 Jan 1951.

The fonds was donated to the City of Edmonton Archives by Bonnie Kinnaird Woolgar in 1985 and by the Northern Alberta Pioneers and Old Timers' Association (NAPOTA) at an unknown time.

The textual material was arranged by the archivist in chronological order.
The photograph was assigned an item number with the prefix EA-588.