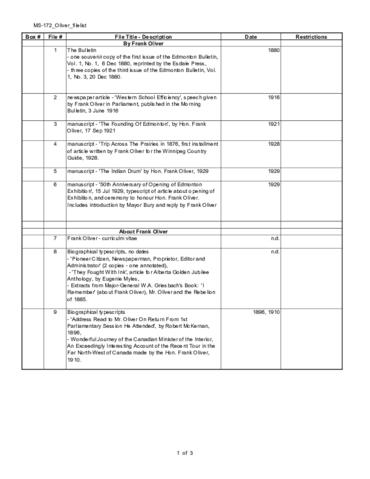 Frank Oliver was born in 1853 to Hannah Oliver and Frank Bowsfield in Peel County, Ontario. Frank decided to take his mother’s last name in his teens.

Frank worked as a typesetter in Toronto for The Globe before coming west to Winnipeg in 1873 where he worked for the Manitoba Free Press. Frank arrived in Edmonton in 1876 and in 1880 he founded Edmonton's first newspaper, the "Edmonton Bulletin", in partnership with Alex Taylor.

In 1883 he was elected to the Northwest Territories Council and in 1896 he entered the House of Commons as an independent Liberal - the first member of parliament from Alberta. In 1905 Sir Wilfrid Laurier appointed him Minister for the Interior and he later became a member of the Privy Council. Oliver ran in both the 1917 and 1921 federal elections but was defeated in both elections. In 1923 he was appointed to the Board of Railway Commissioners, which he participated on until his death.

Though he had divested himself of his interests in The Bulletin in 1923, two years later he bought the paper back with hopes to resell it at a profit. However this was not achieved. Oliver turned to writing, including drafting a history of the fur trade and reminiscences of his early years in the west. The University of Alberta conferred an honorary degree of LLD on Oliver in 1931.

Frank Oliver died suddenly on 31 Mar 1933 while in Ottawa on Board business. His body was returned to Edmonton and he was buried at the Edmonton Municipal Cemetery.

John Oliver was the son of Frank Oliver.

The fonds was donated to the City of Edmonton Archives by John Oliver, through the Northern Alberta Pioneers & Old Timers Association.

The fonds was arranged by the archivist by creator.