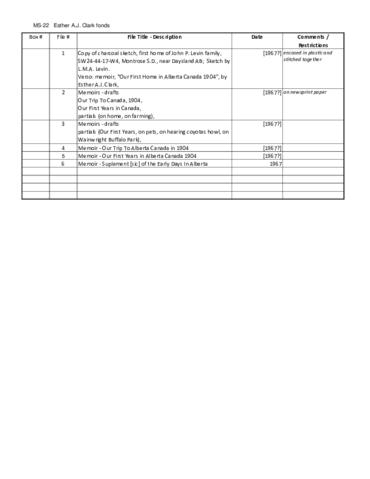 Esther Alida Josafina Levin was born 17 Apr 1894 in Chicago, Illinois, USA, to Alida Johnson and John P. Levin. She travelled with her family from Little York, Illinois to Alberta in 1904. The Levin family, who were of Swedish decent, homesteaded near Daysland, Alberta. Mr. Levin worked for the Carbee Ranch before establishing his own farm. Mr. Levin passed away in 1911. As the oldest child, Esther continued to work on the farm.
In 1917 she married John Clark, from Durham, England. The couple lived in Camrose before moving to Edmonton in 1924 where they raised a family. They had eight children – John, Violet, Mabel, Esther, Kenneth, Lawrence, Norman and Raymond.
Esther Levin Clark died 6 Apr 1972 and is buried in the Edmonton Cemetery.

This fonds was donated to the City of Edmonton Archives by Esther Clark in 1967 and 1969.

The material was arranged by the archivist in chronological order.
The photographs were assigned item numbers with the prefix EA-325.

The charcoal sketch in file 1 was originally known as MS-175 Esther Clark fonds; merged into this fonds.