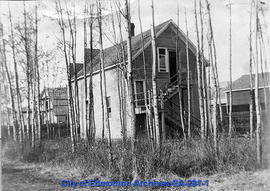 Edward Bell arrived in Edmonton from Ontario in September 1912. He began work as a teacher in Strathcona at the Bennett School and by the spring of 1913, Ed Bell was the principal of the school. Mr. Bell resigned in February 1914 and moved to the Griffin Creek District, north of Peace River. By 1963, Edward Bell was in Victoria, B.C. It is not known what happened to Edward Bell after moving to Victoria.

This fonds was donated to the City of Edmonton Archives by Edward Bell in 1963.

The photograph was assigned the prefix EA-281.

This MS was formerly Mrs. Marie Samuel fonds - those records have been deaccessioned.
The records currently in this MS, were formerly in the clipping file - Bennett School.