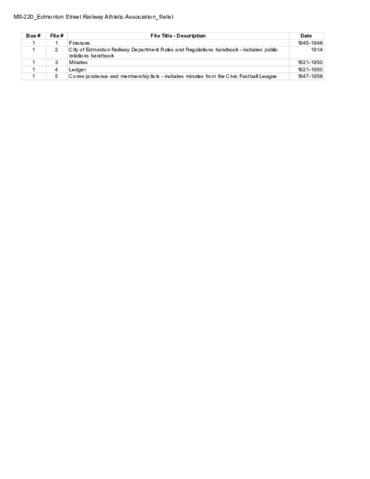 The Edmonton Street Railway Athletic Association was formed in 1921. In the early years the association started baseball, soccer, and hockey teams. However, by 1930, all activities had stopped and the association ceased to exist. It was resurrected in 1945 and began to sponsor hockey, softball, and fastball teams. A meeting was held in November of 1958 to close the bank account of the Edmonton Transit Athletic Association, as they had not held a meeting since 1950.

A. Manly was a conductor and member of the Edmonton Street Railway Sports Club.

This fonds was donated to the City of Edmonton Archives by Mrs. A. Manly in 1978.

Files organized by archivist according to record type.