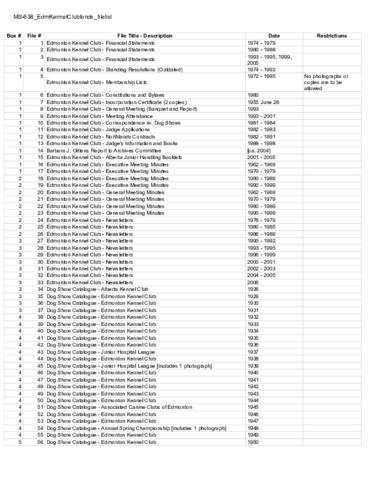 2.25 m of textual records and other material

The Edmonton Kennel Club was first organized in 1910 by a group of local dog fanciers in the home of Mr. W.S. Candy. The Mayor of Edmonton at the time, Charles May, was elected the first President of the Club. After the inaugural meeting, subsequent meetings of the Club were held in the Edmonton Civic Building Council Chambers.

The Club’s main objective throughout its history has been to promote purebred dogs and responsible dog ownership. To accomplish these objectives, the Club holds community meetings with educational sessions directed to adults and children, through outreach activities such as lectures and coloring books, respectively. Each year, the Club also holds a dog show/obedience trial over the course of a weekend that is open to the public. The event is entirely run by club volunteers, who also enter their own dogs into the trials.

Both Barbara J. Gittens and Mrs. M. Jacobs were active members of the Edmonton Kennel Club when they donated the records to the City of Edmonton Archives.

The material was arranged by the archivist by type of records, and then in chronological order.