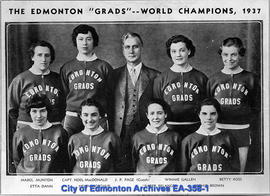 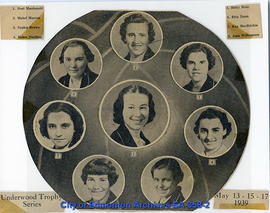 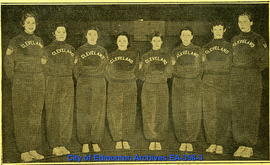 The Edmonton Commercial Graduates Basketball Club, popularly known as the Edmonton Grads, was a world renowned women's amateur basketball team from 1915 to 1940. Coach J. Percy Page, born in Rochester, New York and raised in Ontario, moved to Edmonton, Alberta in 1912. He became principal of the new McDougall Commercial High School in 1913 and coached the girls’ basketball team to the provincial championship in 1914. The original Edmonton Grads players were members of that championship team who, having left school or graduated, formed the Edmonton Commercial Graduates Basketball Club to continue playing under Percy Page’s direction.

From the beginning they dominated the teams they played, consistently winning city, regional and provincial titles. In 1922 the Grads won their first Canadian title, in 1923 their first North American championship and in 1924 their first European (often regarded as World) title. Over the 25 years the team existed there were 38 official players who wore the team uniform. The Grads travelled throughout North America and Europe playing approximately 412 games, with a 95% win record. This record of victories includes being undefeated Canadian champions (the championship was awarded to the Toronto Lakesides in 1931 by default). They were never successfully challenged for the Underwood Trophy, a Canada – US challenge cup, and defeated only once for the North American championship (in the first series of that championship). Although not an Olympic sport, the Grads toured during four Olympic Games in Paris (1924), Amsterdam (1928), Los Angeles (1932) and Berlin (1936) winning all 27 exhibition games to secure the world titles. On their 25th anniversary, the Underwood Trophy was presented to them permanently.

The team always maintained amateur status and the members held full-time jobs which meant practices were limited to two evenings a week. The Grads were forced to fold with the advent of World War II. Their last game was played in the Edmonton Arena on June 5, 1940.

Although disbanded, the team had several reunions and remaining team members were often called upon to appear at special events. J. Percy Page was inducted into the Alberta Sports Hall of Fame in 1966 and the team was inducted in 1974. They were inducted into the Edmonton Sports Hall of Fame in 1973. A National Historic Monument was dedicated to the Edmonton Grads on August 2, 1978. The Edmontonian film-maker Allan Stein and writer Mairi MacLean of Stein/MacLean Productions made a film, "Shooting Stars", about the Grads, released September 10, 1987.

The Edmonton Commercial Grads are collectively members of the Edmonton, Alberta and Canadian Sports Halls of Fame. The last Grad, Kay MacRitchie MacBeth, died in 2018.

This collection was donated to the City of Edmonton Archives by Alan Lake, George R.A. Rice, Anonymous, Edna Clark, Ethel Marianix, Catherine Luck, Marilyn Mol and A.E. Alford (via City of Edmonton Artifact Centre, 1983) between 1965 and 2003.

The material was arranged by the archivist in the order that it was received.
The photographs were assigned item numbers with the prefix EA-358.