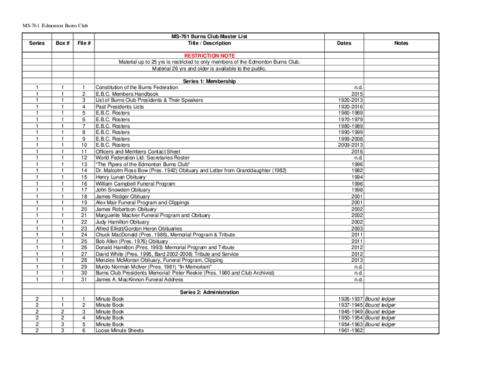 4.25 m of textual records and other material

The Edmonton Burns Club (EBC) was established in 1919 in Edmonton as a branch of the Burns Clubs of North America to celebrate the Scottish poet and bard, Robert Burns (1759-1796). The EBC takes an active role in encouraging awareness of Scottish literature and art through recitations of poems, singing, and historical awareness. The Club meets annually at their Burns Night Banquet to celebrate, recite the works of Robert Burns, and discuss matters for the year past and the year ahead. Although the center of the Club’s activities pertains mostly to its namesake, the EBC works to foster a love of Scottish heritage in general.

This fonds was donated to the City of Edmonton Archives by the Edmonton Burns Club in 7 donations between 2010 and 2016.

The material was arranged according to the filing system of the creator, as much as possible.

Some files are restricted due to donor agreement.