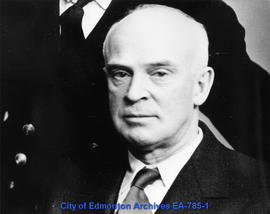 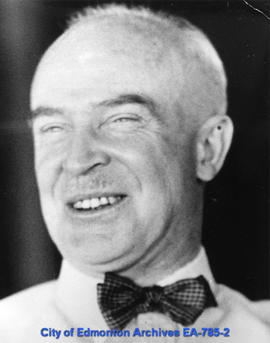 Norman Llewellyn Terwillegar was born 26 Sep 1883 to Catherine Walter and Archibald Terwillegar in East Whitby, Ontario. He graduated from the University of Toronto in 1909 and interned at the New Haven State Hospital in New Haven, Connecticut, USA. Following the completion of his intership, Dr. Norman L. Terwillegar returned briefly to Ontario in 1911, but sometime that year moved to western Canada and began a practice in Tofield, Alberta.

Norman and Dorothy's first son, Norman Allin, also became a surgeon. He enlisted in the Navy in 1940 becoming a Surgeon Lieutenant. He served on several ships that saw some of the heaviest battles in the Mediterranean while evacuating casualties. Dr. Norman A. Terwillegar was killed in action in 1943 when the ship he was on was attacked and sank in the Italian Harbour during the early days of the invasion of Italy. He was presumed missing, lost at sea, at the age of 28 years.

Norman and Dorothy's daughter, Catherine, married Robert Folinsbee and lived in Edmonton. Their third child, William Robert, died in 1944 at the age of 22 yrs.

Dr. Norman L. Terwillegar was associated with the Royal Alexandra Hospital for his entire career, but also had a private practice, initially with offices in the Tegler building and later from his home in the Westmount neighbourhood. He was widely respected throughout Edmonton for his devotion to his patients, both at the hospital and in private practice. At various times, he served as President of the Edmonton Academy of Medicine and the Alberta Medical Society.

Dr. Terwilligar's home in Westmount (10727 - 125 Street), where the family lived from 1920 to 1959, is considered to be a fine example of the Craftsman style of architecture. The residence is on the Alberta Register of Historic Places (provincial and municipal) and has received several historic awards, including an Edmonton Historical Board Plaque award.

To honour Dr. Terwilligar's good character and influence, the City of Edmonton named a southwestern community Terwillegar Heights in the 1960s.

John Folinsbee is the grandson of Dr. Norman L. Terwillegar.

The fonds consists of photographs of Dr. Norman L. Terwillegar.

This fonds was donated to the City of Edmonton Archives by John Folinsbee in 2004.

The photographs were assigned item numbers with the prefix EA-785.