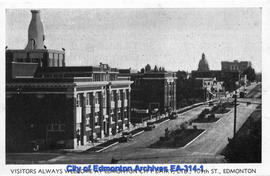 Dorothy Kendall was born in Tofield, AB on March 20, 1915. She married Norman Willmore on July 12, 1933 and their son, John Jack Willmore (known as Jack) was born November 24, 1939 in Edmonton. At that time they moved to Edson, AB and ran a shoe store for many years. In 1953, Norman Willmore, MLA for Edson was named as Provincial Minister of Industries and Labour.
In 1958, Norman and Dorothy moved to Edmonton, AB. In 1960, Norman was made Provincial Minister of Lands and Forests. Norman was tragically killed in a vehicle collision, 4 Feb 1965 while on his way to attend a fish and game convention. He is buried in Mount Pleasant Cemetery in Edmonton. The Willmore Wilderness Park was named in his honour. Dorothy continued to live in Edmonton.
On April 9, 1980 Dorothy married respected obstetrician Dr. Eby Quehl in Ponoka, AB.
Dorothy and Norman’s son, Jack, died 7 Aug 2003. Dorothy Kendall Willmore Quehl died 19 Aug 2010.

The fonds consists of postcard greeting cards, predominantly Christmas but also Best Wishes, military (“He Served His Country’) and New Year’s. Also includes two lacquer-finished postcards of drawings of Sussex, England countryside.
The records include references to Dorothy Kendall Willmore Quehl, Norman Willmore, John (Jack) Willmore, and Dr. Eby Quehl.
The photograph is a postcard of the Edmonton City Dairy with the milk bottle on the roof.

This fonds was donated to the City of Edmonton Archives by Dorothy (Kendall) Willmore in 1975.

The material was arranged according to the filing system of the creator.
The photograph was assigned item number with the prefix EA-314.