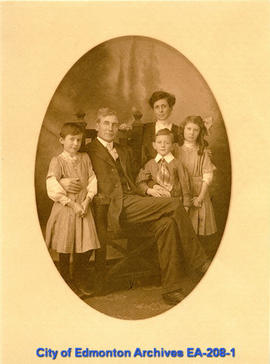 Dorothy May was born 13 Feb 1912 in Stonewall, Manitoba. She worked for the E. Eaton Company until her marriage to Phil Matthewson in 1943. They had one daughter, Joan. Dorothy taught both piano and singing, and was active in local music festivals in Stonewall. In 1967 Dorothy was awarded the Canadian Centennial Medal for her contributions to music in the community.
Dorothy May Matthewson died 27 Oct 2006 in Manitoba.

The fonds consists of a photograph of Dr. A.H. Goodwin and family. Dr. Goodwin was the first dentist in Edmonton.
Alexander Hooper Goodwin was born in 1968 to Elizabeth Wells and Cyrus Goodwin in New Brunswick. He married Selena (Lena) A. Taylor on 4 Jan 1898. By the following year, Alexander and Lena had settled in Edmonton and Alexander had established a dental practice on Jasper Ave. They had three children – Eleanor Beatrice, Lilian Alexandra, and William Taylor.
Dr. Alexander Hooper Goodwin died 4 Mar 1964 in Edmonton.

This fonds was donated to the City of Edmonton Archives by Dorothy Matthewson in 1974.

The photograph was assigned the prefix EA-208.