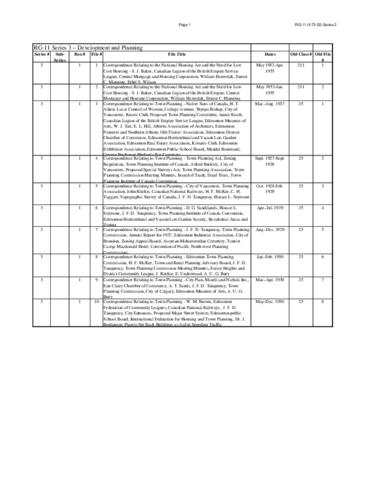 This series of records is related to the Commissioners' role of overseeing all issues of land ownership within the City's limits. Residential and industrial development had to be managed and eventually planned for. Standards were required for buildings and construction and the resulting enforcement duties. This series contains the following subseries:

3.1 Land
This subseries includes records dealing with the purchase, sale, and management of land resources within the city, including subdivision of land, easements, urban renewal, future planning, and land sales, leases and purchases.

3.2 Zoning
This subseries consists of records relating to the restrictions placed on development and changes to that system over the years.

3.3 Architects and Inspections
This subseries consists of the records generated between the Architect's Department and the Commissioners, including records relating to the enforcement of building and zoning bylaws, including the management of civic office buildings (such as the Civic Block).

3.4 Economic Development
This subseries consists of the records relating to the promotion of the City for tourism, conventions and other special events to encourage economic development.

This material was transferred to the City of Edmonton Archives in 1973 by the Office of the City Commissioner.

This material was re-arranged by the archivist between 2007 and 2011 to make it more accessible. The original class and file numbers have been retained in columns on the right hand side of the finding aid.
The cartographic material was assigned item numbers with the prefix EAM-172 and EAM-114.