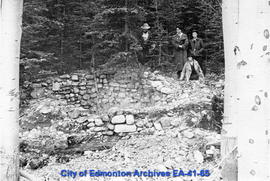 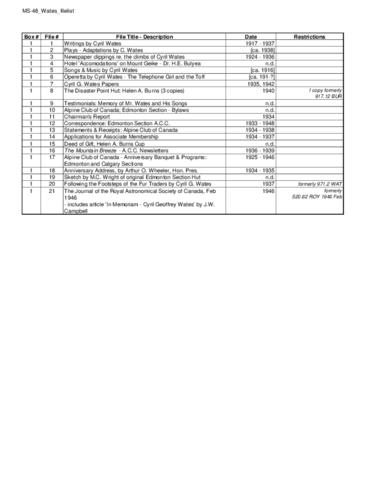 Cyril Geoffrey Wates was born in Brixton, greater London, England on July 18, 1883. He immigrated to Canada and worked for the City of Edmonton Municipal Telephone System, 1909-1946, eventually rising to Maintenance Foreman. He was an enthusiastic participant in the worlds of music, mountaineering, astronomy, and writing. He was choirmaster of St. Stephen's Anglican Church and composed many songs, including a comic operetta, "The Telephone Girl and the Toff".

He joined the Alpine Club of Canada in 1916, participated in twenty summer camps, and climbed more than fifty peaks, including the first ascent of Mount Geikie in 1924. He was chairman of the Edmonton Section, 1925 and 1932-1935, western vice-president and president, 1938-1941. He received a Fellowship in the Canadian Geographic Society in 1939. He was also responsible for the publication of an Alpine Club songbook, Songs of Canadian Climbers, and the construction of an alpine hut in the Tonquin Valley, now named for him and a colleague, E.R. Gibson, the Wates-Gibson Hut.

He was regarded as one of Canada's most outstanding amateur astronomers, building several telescopes, including a 12.5 reflector that he presented to the University of Alberta in 1942. He served as President of the Edmonton Centre of the Royal Astronomical Society of Canada, 1938 and received the Chant Medal from the society "for outstanding amateur contribution to astronomy in Canada". His writing included professional reports in telephone engineering, articles relating to his mountaineering and astronomical interests, stories and plays, including a series of science fiction short stories and a novel, published in Amazing Stories, 1927-1930.

He was married twice, first to Alice Reeves, sister of the Edmonton photographer Gladys Reeves, from 1923 until her death in 1943; secondly to Helen Adela Burns, from 1944 until his death in Edmonton, February 2, 1946.

Helen (Burns) Wates was born in Caledonia, Ontario on December 21, 1899. She moved to Edmonton, Alberta where she was a school teacher and vice-principal, 1921-1959. She was an active mountaineer, including in her achievements the first ascent by a woman of Mount Edith Cavell and was also active in the girl guide movement, St John's Ambulance Brigade, and the Women's Royal Canadian Naval Service in World War II. Helen (Burns) Wates died on September 20, 1974.

This fonds was donated to the City of Edmonton Archives by Helen (Burns) Wates in 1968.

The photographs were assigned item numbers with the prefix EA-41.

Photographs have been described at the item level and are available in the Reference Room.

This MS was first known as the Cyril G. Wates fonds, then known as Helen Wates fonds.
Material formerly in MS-66 (Alpine Club of Canada) has been repatriated to MS-48.