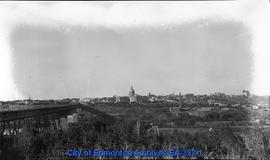 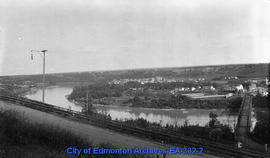 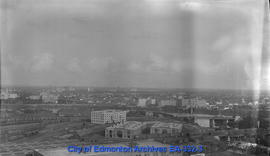 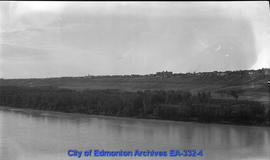 Cuthbert Norman Clark was born 6 Aug 1895 in Vancouver, British Columbia. His father was Robert Clark (1845-1909), an entrepreneur born in Scotland and who immigrated to Canada in 1861. Robert Clark was active in business on the west coast of Canada and the United States before settling in Vancouver in 1886, where he would sit on City Council and the Vancouver Board of Trade.
In 1928 Cuthbert Clark took his family on a vacation from Edmonton to northern British Columbia to visit the Kitwanga Totems and back through the Kettle Valley, BC.
Cuthbert Clark died in 1970 and is buried in Vancouver’s Mountain View Cemetery

These photographs were sent unsolicited by the donor to the Edmonton and District Historical Society in 2015. The donor wanted the photos preserved due to their historical importance. As the Edmonton and District Historical Soceity does not have a collection, the material was forwarded to the City of Edmonton Archives in 2016. The donor was informed by mail that the material had been sent to the City of Edmonton Archives.
The photos were inherited by Roger Phillippe from his father Vernon Phillippe, who received them from Dr. Cuthbert Clark, for whom he acted as a business manager.

The fonds consists of photographs of the Edmonton skyline from various viewpoints.

This fonds was donated to the City of Edmonton Archives by the Edmonton and District Historical Society on behalf of Roger Phillippe in 2016.

The material was arranged according to the filing system of the creator.
The photographs were assigned item numbers with the prefix EA-332.

The photographs may be nitrate negatives.

Photographs were scanned immediately and are in frozen storage.