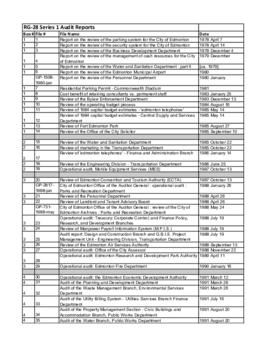 The Office of the Auditor General was established in 1977 by Bylaw No. 4873: A Bylaw to Appoint a City Auditor General. An Auditor was appointed in late 1977 but did not start work until January 1, 1978. At the time, Edmonton was the only municipality in Canada to have an auditor general. When the Office was created, it absorbed the internal audit section which had previously been part of the Finance Department.

When it was established in 1977, the role of the Office of the Auditor General was to examine the financial, administrative, and organizational affairs of the City of Edmonton. Analysis was done to ensure efficient, effective, and economical operations, and to promote accountability and continuous improvement. The work was done in a variety of ways. Cash audits determined whether cash resources were handled in a manner consistent with established City requirements and safeguards against loss. Comprehensive reviews determined whether a department, service, or program operated efficiently, effectively, and economically, and whether risks were minimized. Advisory services assisted in the development or enhancement of sound business practices and strategies. Governance activities determined whether corporate management practices met general ethical and performance standards, and complied with legal and regulatory requirements. Investigative services proved or refuted alleged fraudulent or inappropriate behaviour on the part of a City employee, Council member, or other party. Special projects included all audits, investigations, or studies not listed in the annual audit plan. Finally, system audits ensured that adequate controls were built into automated systems and determined whether they continued to operate effectively.

This material was transferred to the City of Edmonton Archives between 1979 and 2013.

Copyright held by the City of Edmonton.