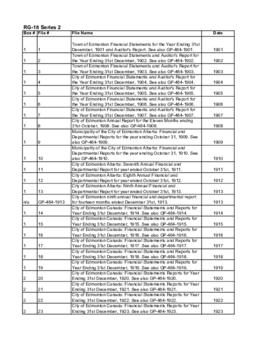 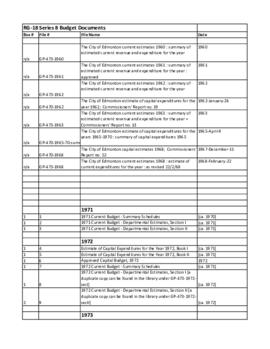 The financial management of the City has played an important role in the function of civic government since Edmonton's incorporation as a town.

Treasurer's Department
The Treasurer's Department was responsible for receiving and safely keeping all money belonging to the City; paying money as directed by law or by bylaw; depositing all money for Council; jointly signing necessary checks with the Mayor as well as debentures, promissory notes and other securities; and preparing and submitting regular financial reports stating moneys at the credit of the City. In the early 1910s the Treasurer maintained the fiscal integrity of the departments, and kept a General Ledger that summarized the financial position of the City as a whole, including capital liabilities and assets of utilities. In 1952 the Treasurer's Department was responsible for receipt of payments for all City accounts except for permits and police fines; technical direction for cashiering and cash handling for all City departments; preparation and issue of checks except payroll; banking and financial arrangements; custody of securities; records of pension payments; and planning and directing the work of the Mechanical Accounting Division.

Office of the Town Auditor
In 1892 the Office of the Town Auditor was established, and was responsible for auditing the accounts of the municipality. The successor to this office was the Office of the Comptroller and Auditor, established in 1915. This new entity had expanded duties which included recording all expenditures authorized by council and issuing necessary vouchers for payments, auditing books and accounts of all departments, and preparing quarterly and annual financial statements for the City. The Treasurer was still responsible for the management of the City Treasury. The Comptroller and Auditor had jurisdiction over all City departments and could make any recommendations deemed expedient. By 1930 the Office of the Comptroller and Auditor had become the central accounting centre handling the current and capital accounts, accounts receivable and payable, and annual statements. In 1942 the Comptroller and Auditor began examining and reporting upon all books and accounts of the Edmonton Exhibition Association, the Edmonton Hospital Board, the Edmonton Library Board, the Local Board of Health, the Town Planning Commission, the Stadium Commission, and the Boxing Commission.

Comptroller's Department
In 1952 the Office of the Comptroller and Auditor became the Comptroller's Department, which was responsible for the planning and technical direction of general accounting procedures for the City; checking and approval of inter-departmental invoices, salary and wage change slips and contract payments; preparation of accounts payable and general ledger records; consolidation of annual budgets; preparation of annual financial report and other consolidated financial and statistical reports; maintenance of employees personal history and earnings records; unemployment insurances, workmen's compensation, and group and other insurance matters; and calculation of pension amounts and advice to employees. By 1955 the Department was also responsible for microfilm services.

During the early to mid 20th century these various bodies were responsible for the City's finances, and often work together. For example City Comptroller, along with the City Auditor and the Treasurer, were joint custodians of the Sinking Fund in the 1930s.

The Finance Department originally had three divisions: Treasury, Administration, and Central Accounting. In 1961 the data processing function of the Mechanical Accounting Department was transferred to Central Accounting Division. In 1965 the Finance Department was reorganized into four divisions. The Administrative division was responsible for budget preparation, general administration, and microfilming and stationary services for all city departments. The Treasurer operated a centralized collection and receipting system for all moneys paid to the City of Edmonton, handled short term borrowing and investment, control of the funds under the Sinking Fund Trustees, operation of the Traffic Tag Accounting system, and custody of the City vault. The Central Accounting division was composed of two sections: Data Processing and Central Accounting, it was responsible for payroll, accounts receivable and accounts payable, statement of revenue and expenditure, system planning, and coordination of data processing for all city departments. The Purchasing Division operated a central purchasing system for all City Departments and maintained a central stores and a small truck rental service.

In 1973 Risk Management, the city's insurance function, became a separate section of the Finance Department.

In 1974 the Purchasing Branch was renamed the Materials Management Branch and the Budget Control and Research Branch was separated from Finance to become a separate department.

In 1976 the Tax Collection function separated from Assessor's Department and became a branch of the Finance Department.

In 1977 the Bylaw Enforcement Department was created to centralize inspection and enforcements. The licensing and permit functions of Finance were transferred to Bylaw. Also that year the Central Supply and Services Department was formed and took over the Materials Management Branch from Finance. By the end of 1977 the Finance Department consisted of the Treasury Branch, Controllers Branch, Risk Management Section, Administration Section, and Tax Collection Section.

When the Bylaw Department was disbanded in 1984 the Building Inspection Branch was incorporated into the Planning Department, while the rest of Bylaw's functions went to Finance. The Document Services Section joined Treasury Branch, Security Section joined Risk management Branch, Bylaw administration staff joined Finance's Administration Branch, and Enforcement Branch was transferred in its entirety to Finance.

Also in 1984 the Utilities Services Department became a branch of Finance, except for Customer Services, which went to Edmonton telephones.

In 1987 the Insurance Adjustments and Claims Section of the City Solicitor's Office was relocated to the Finance Department, becoming part of Risk Management and Corporate Security.

In 1988 the Assessment Office and the Material Management Branch joined the Finance Department.

In 1990 the Finance Department's responsibility of issuing grants-in-aid to non-profit organizations was passed on to the Parks and Recreation Department and the Community and Family Services Department.

In 1992 the Utilities Services Branch was moved to Edmonton Power. Also that year the Materials Management Branch divided into two branches: Purchasing and Printing Branch, and Corporate Inventory and Warehousing Branch.

In 1994 bylaw officers in Finance began enforcing unlawfully parked vehicles through the Traffic Bylaw. For the past 34 years they had enforced only the Dog Bylaw. Also in this year the Information Services Branch was formed from the Computing Resources Department and the Purchasing and Printing Branch, and Corporate Inventory and Warehousing Branch merged back into the Materials Management Branch.

The Finance Department was dissolved in 1997 when it was combined with the Computing Resources Department, the Law Department, and the Office of the City Clerk to form the new Corporate Services Department.

This material was transferred to the City of Edmonton Archives between 1958 and 2021.