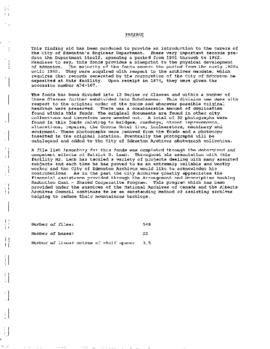 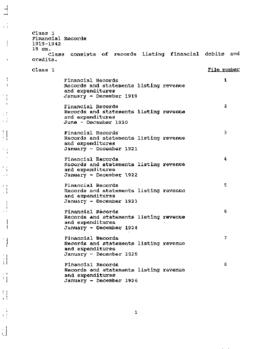 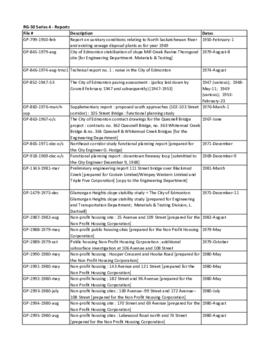 The Engineer's Department was established in 1904 by Bylaw 266 (To provide for the appointment of a Town Engineer and to define his duties). As laid out in this Bylaw, the duties of the Town Engineer included streets and their improvement and repair, sidewalks and their construction and repair, sewerage, electric light and power, the City Market, nuisance grounds (dumps) and the disposal of refuse, and the purchase of material for municipal purposes. This was a very large responsibility for one office, and over the next few years many of these functions were moved elsewhere.

In 1906 the Fire Department went from a volunteer system to a paid system, and soon thereafter it became independent of the Engineer's Department.

By 1914 the utilities (the power house, the water works, sewerage, and electric light and power) had become separate entities and were no longer the responsibility of the City Engineer.

In 1949 the Engineer's Department began operation of a gravel pit south of Mayfair Golf Course (on land later known as Mayfair Park/Hawrelak Park).

In 1953 the department began setting up district yards to disperse equipment around the city and reduce travelling time. A committee of utility and construction superintendents was also set up to coordinate work on jobs.

Formerly an independent department, between 1961 and 1966 Waterworks was operated as a section within the Engineering Department.

In 1971 the Engineering Department was dissolved when it merged with the Edmonton Transit System.

This fonds consists of records created by the Engineer’s Department, and includes correspondence, financial information, and other records created as a result of doing their work. An arrangement has been placed on the records. They have been placed into the following series:

This material was transferred to the City of Edmonton Archives between 1969 and 1984 by the Engineering Department.