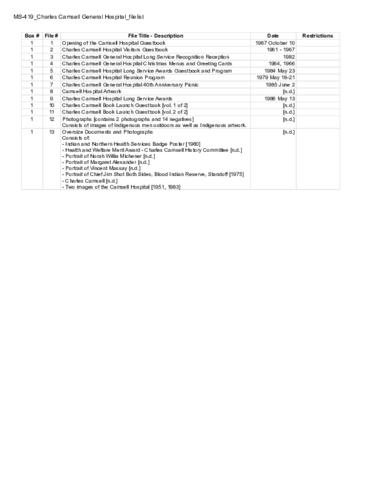 The Charles Camsell Provincial General Hospital operated in Edmonton between 1946 and 1996. Until 1980, the hospital was owned and operated by Indian Health Services. Although primarily utilized as a tuberculosis hospital, the Camsell also provided general care in the form of maternity, pediatric, and medical services.

Although eventually renamed after Dr. Charles Camsell, a former Deputy Minister of Mines and Resources, the original hospital building was built by the Jesuit order for their boy’s college, Francis Xavier Academy, in 1914. The new building was leased to the American military for use as a forward operating base for the construction of the Alaska Highway until 1944.

It is not known how the Provincial Museum of Alberta acquired the records.

The fonds was donated to the City of Edmonton Archives by the Provincial Museum of Alberta in 1992.