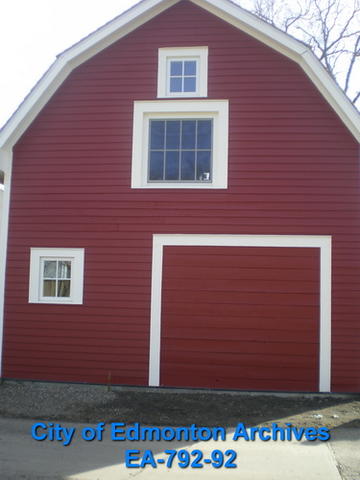 10828 - 125 Street.
The Chandler Barn is a rare surviving example of a once common style of building in Edmonton. Up until the First World War, transportation was dominated by horse-drawn vehicles, with the first automobiles only making their appearance on Edmonton streets in 1904. Instead of a garage for cars, many early Edmonton residents built small barns for a horse and carriage on their residential lots.
In 1912 Edward Chandler and his wife Lillian purchased a lot in the new residential area of Westmount. Chandler had moved to Edmonton from his birthplace in New Brunswick with his family as part of the great Alberta economic boom preceding the First World War. He worked as a lumber inspector and printer in Edmonton and was wealthy enough to apply for a permit to build a house and small barn and carriage house on the lot that same year.