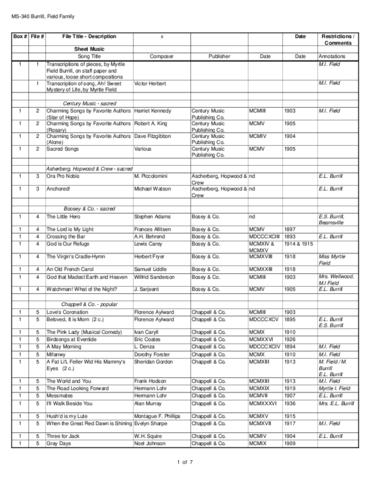 Emerson L. Burrill was born 30 Aug 1886 in Burgessville, Oxford County, Ontario, to Rebecca Burkett and Charles Burrill. He was the youngest of twelve children.

He grew up in southern Ontario, including the Oxford County and Beamsville areas. Emerson became a commercial teacher and in 1917, enlisted in the Canadian military in Ottawa. He was made a Corporal (No. 2098948) and assigned to No. 3 A.M.C. Training Depot (CEF). Over the next two years he encountered medical problems and was sent to the Queen's Military Hospital in Kingston, Ontario. He did not serve overseas. Emerson was discharged from the military on 7 Nov 1919.

Emerson Burrill next headed to western Canada. He worked in Vancouver, as a chiropractor, from 1921 to about 1925. However, this was a time before the medical practice was regulated and anyone who worked in the health care field, but was not a M.D., called themselves a chiropractor.

By the 1930's, Emerson went to Alberta. In 1934 Emerson L. Burrill married Myrtle I. Field in Edmonton. Emerson worked as a clerk at the Hotel Macdonald, and later for the CNR. Given the amount of music sheets in the fonds that have his signature, it is assumed that he was very musical.

In 1934, Myrtle Irene Field married Emerson L. Burrill, in Edmonton. Myrtle Field Burrill was the proprietress of Field's Pharmacy on Fort Road. Given the amount of music sheets in the fonds that have her signature and annotations, it is assumed that she was very musical.

By the 1920's Violet was working in London, England as a secretary at the Chelsea Hospital for Women. In late 1924, Violet Scipeo Field married Dr. Thomas H. Field in Middlesex, England. In early 1925, Violet moved to Edmonton to be with her husband.

Dr. Thomas H. Field, brother of Myrtle Field (above), was a prominent Edmonton surgeon, and at one point, was the President of the Alberta College of Physicians and Surgeons. Dr. Thomas and Violet S. Field had two children, Yvonne and Derek.

Violet Field, now known primarily as the second alderwoman of Edmonton, was also known as one of Edmonton's leading club women, and a strong advocate for social and welfare reform. Her involvements included being President of the Women's Canadian Club and Victorian Order of Nurses, chair of the Northern Alberta Division of the Navy League and the Red Cross. She served on Edmonton City Council in 1952-1953, and served as acting mayor in the absence of Mayor Hawrelak in 1952. Violet S. Field was also an accomplished pianist.

Much of the records belonged to Emerson Burrill and Myrtle Field Burrill before their marriage. It is assumed that once married, and certainly after Emerson's death in 1951, their records were combined.

It is suspected that Myrtle Field Burrill inherited the musical records of her sister-in-law, Violet S. Field, following Violet's death in 1975.

It is not known how Beatrice Dunn acquired the records following Myrtle Field Burrill's death in 1980.

The fonds consists of sheet music belonging to various members of the Burrill and Field famiilies, but mostly Emerson L. Burrill and his wife, Myrtle I. Field Burrill.

Other pieces have no initials, signatures or annotations. It is possible, perhaps likely, that these pieces belonged to Violet S. Field.

The music is mostly sacred and spiritual, but also includes popular and patriotic works.

Note: the annotation on some Burrill pieces appears as if it could be E.S. Burrill. However it is suspected to be a short-hand fancy script for E.L. Burrill. The handwriting is identical and there are no other Burrill family members with the initials 'E.S.'.

This fonds was donated to the City of Edmonton Archives by Beatrice Dunn in 1980.

The material was arranged by the archivist by publisher, then by music genre.

Some of the records are fragile, crumbling, significant tears.