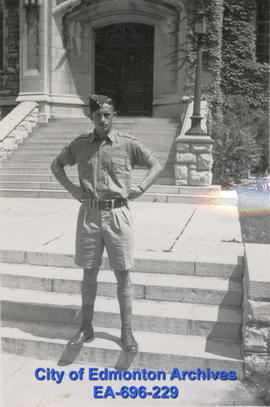 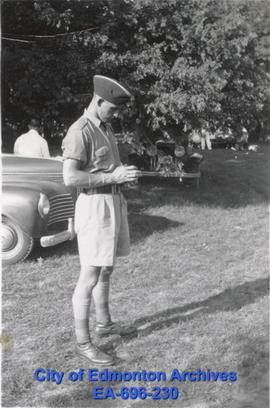 Bruce Fraser Macdonald was born 12 Jul 1917 to Therese Fraser Holland and John Kenneth Macdonald in Edmonton. He graduated in Commerce from the University of Alberta in 1940 and was then commissioned in the Canadian Army.

Bruce had a distinguished wartime military career where, during the Second World War, he was cited for gallantry in 1945, and was awarded the Distinguished Service Order (DSO) and the Croix de Guerre.

After the war he served as commandant of the armored corps school in Camp Borden, near Barrie, Ontario. In 1957 he was appointed staff planner at NATO (North Atlantic Treaty Organization) in Washington, DC. In 1959 he became executive assistant to the chairman, Canadian Joint Staff.

Bruce retired from the military in 1968 and became the President of The Canadian Chemical Producers Association until 1979.

The series consists of records pertaining to Bruce’s military career and family.

The material was arranged by the archivist by date.
The photographs were assigned item numbers EA-696.