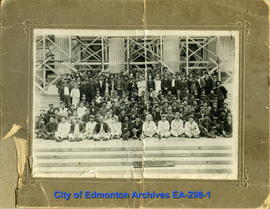 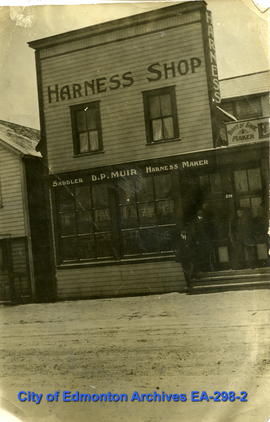 Lily Lambert was born to Eliza Coley and ? Lambert in 1906 in England. She arrived in Canada in 1910 with her widowed mother. Eliza married Sidney France and by 1911, Sidney, Eliza, and Lily were residing in Strathcona. The family lived in an apartment above the D.P. Muir Harness shop on Whyte Avenue. Sidney France was a carpenter and was part of the crew who worked on the Alberta Legislature.

By 1916 the family was living in Winnipeg. Sidney and Eliza had two sons, John and Alex.

Lily married Stanly Dalton on 26 Sep 1928 in Winnipeg. They had two daughters – Elizabeth and Catherine. The family remained in Winnipeg, until Sidney and Lily retired to British Columbia.

Stanley Dalton died in 1972 and Lily Lambert France Dalton died in 2003, both in British Columbia, and both are buried at the Kitimat Municipal Cemetery.

Lily Dalton mailed the records to Edmonton City Hall, who forwarded the material to the archives. Included was a letter from Lily indicating the records belonged to her 'father' (ie. stepfather).

This collection was donated to the City of Edmonton Archives by Lily Dalton.