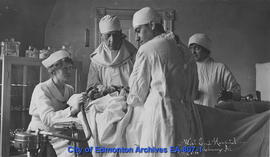 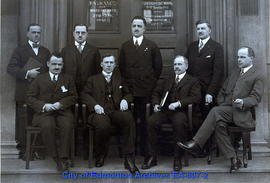 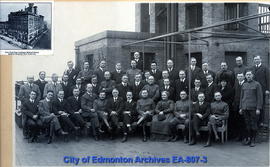 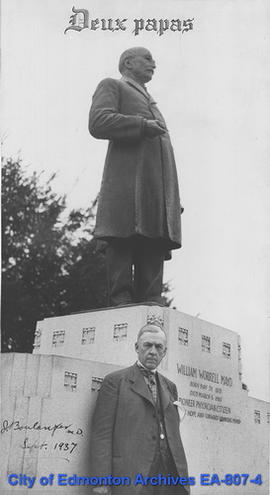 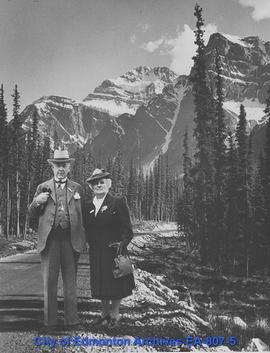 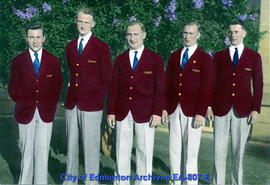 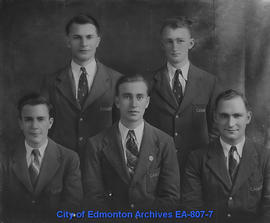 Joseph Boulanger was born 5 Jan 1875 in Montreal to Elizabeth Brissette and Jean-Baptiste Boulanger. He graduated in medicine at the Université de Montreal in 1906 and did an internship at the Hospital de la Miséricode in Montreal. Joseph then did further training at the Mayo Clinic in Rochester, as well as the Post Graduate Hospital and Lying-In Hospital, both in New York. Upon completion of these studies, he moved to Alberta were he first practiced medicine in Athabasca Landing and Grouard before moving to Edmonton, ca. 1912.
Joseph married Blanche Chartier in 1913; Blanche died in 1920 in Edmonton.
Joseph then married Valerie Phaneuf in 1921 in Edmonton. They had two sons, Jean-Baptiste and Michel, both of whom became physicians.
Joseph Boulanger was considered to be a pioneer Edmonton physician and surgeon. He was also very active in the community. Joseph was the first president of the Societé Saint Jean-Baptiste in Edmonton and founded the French-language monthly, Le Canadien-Francais.
Dr. Joseph Boulanger died in 8 Jul 1963 in Edmonton.

Valerie Phaneuf was born in 20 Jul 1885 to Loma Reaume and Hilaire Phaneuf. Valeria taught in schools in Ontario before coming to teach in Edmonton in 1912. She married Dr. Joseph Boulanger in 1921 and they had two sons, Jean-Baptiste and Michel, both of whom became physicians. After marriage, Valerie gave up teaching formally in schools but continued to teach music privately for many years. She was an associate of the Toronto Conservatory of Music.
Valerie Phaneuf Boulanger died 8 Feb 1967 in Edmonton.

Jean-Baptiste Boulanger was born in 24 Aug 1922 in Edmonton to Valerie Phaneuf and Joseph Boulanger. As a youth he was considered to be a brilliant pupil. In 1930, he established a small newspaper, ‘Le Petit Jour’, a quarterly French periodical for children. Le Petit Jour began with a circulation of 18, which increased to 1,300 in five years. In 1935 he was involved in creating the first troop of French Canadian Boy Scouts in Alberta, known as “La Premiere Canadienne-Francaise d’Alberta”.
He was awarded “la medaille de vermeil” from the l’Acadamie Francaise in 1936, as founder and editor of ‘Le Petit Jour’. In 1937, he was part of group of students who were sent to England, representing Canada, to attend the coronation of George VI, in recognition of their scholastic achievements. Jean-Baptiste Boulanger attended the Grandin School and Jesuit College in Edmonton, and then Brebeuf College in Montreal. He studied medicine at the Université de Montreal.
Jean-Baptiste Boulanger died 1 Aug 2000 in Montreal.

This fonds was donated to the City of Edmonton Archives by Dr. Michel Boulanger in 1966.

The material was arranged by the archivist based on subject/creator and then in chronological order.
The photographs were assigned item numbers with the prefix EA-807.

Some of the Boulanger records were formerly known as MS-56.16