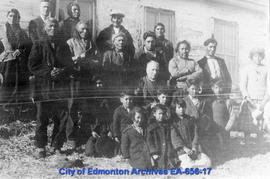 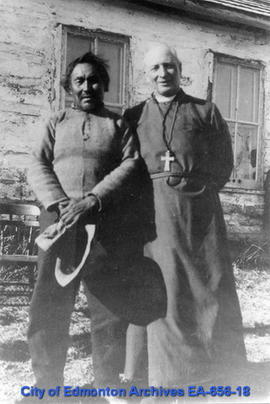 Henry Allen Gray was born in 1863 in London, England. He lived in China for a time where his father was a commander in the British Navy. After his father died, Gray moved with his mother to Canada, arriving in Calgary in 1886, where he took up ranching before attending St. John’s College in Winnipeg in 1892.
In 1895 he was ordained by Bishop Pinkham in Calgary, and came north to Edmonton Parish in 1895 where he was appointed incumbent of Holy Trinity Anglican in Strathcona. In 1897 he became rector of All Saints’ Anglican Church in Edmonton. In 1907 he became Archdeacon of Edmonton. He became the first Bishop of the Anglican Diocese of Edmonton in 1914.
Bishop Gray was dedicated to Edmonton’s youth. He ran a boys’ club for several years, then later a boys’ brigade and boys’ cadet corps. Eventually he took up working with the Boy Scouts movement. His work with young men led to his appointment as a juvenile court judge. He also served as Chaplain for the 19th Alberta Dragoons, and was a member of the Edmonton Public School Board for three terms.
In 1918 Bishop Gray married Georgina Widdy, deaconess at All Saint’s Cathedral in Winnipeg, and they had one daughter, Frances. Bishop Gray left Edmonton with his family in 1931 to retire in England. Bishop Gray died in 1939 in Suffolk, England. After his death, Georgina and daughter Frances returned to Canada, where they settled in southern Ontario.

The fonds consists of copies of photos from the Gray family photo album.
The photographs include photos of the Gray family, including Bishop Gray in his professional capacity, as well as local Boy Scouts and All Saints’ Anglican Cathedral.

This fonds was donated to the City of Edmonton Archives by Frances Lightbourn in 1983.

The material was arranged according to the filing system of the creator. The photographs were assigned item numbers with the prefix EA-656.