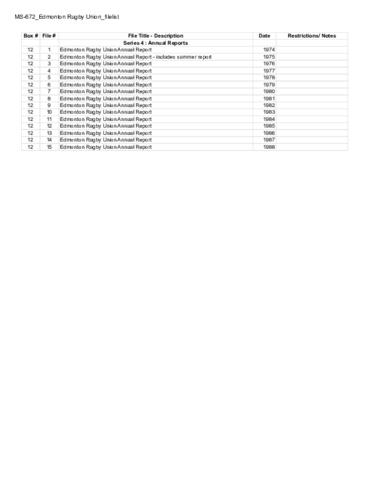 The Edmonton Rugby Union (ERU) is a society and administrative body for rugby teams located in the city of Edmonton and Northern Alberta which was first organized in 1960. The ERU participates in fundraising, works to actively promote the game of rugby to all age groups, and develops and coordinates matches and programs for its members. The ERU is governed by an Executive Board, which in the year following its organization, the President became a member of the Alberta Rugby Union (ARU). At the January 1971 Annual General Meeting, the ERU voted to buy the 33 acre site and build a clubhouse and pitches at what would become Ellerslie Rugby Park, located on Ellerslie Road in Edmonton. Ellerslie Rugby Park was completed in 1975 and was the first regulation sized field in northern Alberta. On April 8, 1981 the Union announced plans for a $2.5M project to improve the pitches and build a new clubhouse. There were 1,500 players and 1000 social members in the ERU by February 25, 1982 when the new 10,000 sq. ft. facility, called "The Club" was officially opened by Mayor Cec Purves and ERU President Dr. Ieuan Evans. Rugby season runs from May to September and the ERU has both men's and women's teams. Every May the season is initiated with the Annual Edmonton Rugbyfest, Canada's largest rugby tournament. There are 14 member clubs that make use of Ellerslie Rugby Park. In 1986 the ERU was faced with overwhelming debt loads but was saved from bankruptcy by a grant from Community Recreation and Culture (CRC) presented by Attorney General Neil Crawford in May 1986. In 2011 the ERU sold four acres of land at Ellerslie Rugby Park to help with renovations. In September 2022, after years of financial losses, Ellerslie Rugby Park announced that it would be closing. The final match at the park was held October 2022. The ERU continues to operate as a membership based society which promotes the game of rugby.

The series consists of the Edmonton Rugby Union’s annual reports from 1974 to 1988. The series also includes a summer report from 1975.

Files are arranged in chronological order by the archivist.