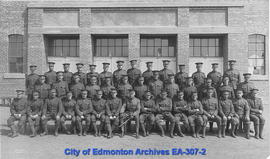 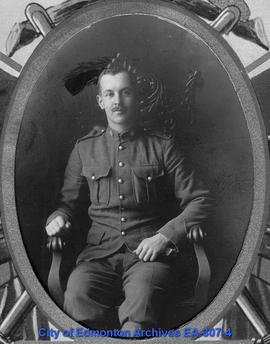 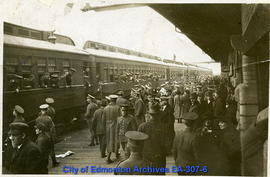 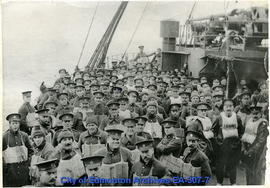 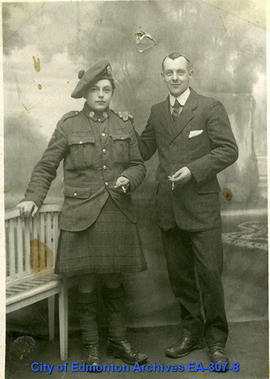 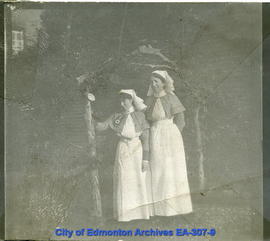 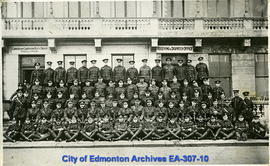 Andrew Lawrie Parnham was born on 27 Nov 1888 in Inverkip, Renfrewshire, Scotland to Andrew and Isabella Parnham. He came to Edmonton in 1911 and worked as an electrician.
The 51st Battalion, CEF, was authorized in November 1914. Andrew Parnham enlisted in the 51st Battalion in August 1915 (Regimental no. 437649). After shipping to Britain with the battalion (April 1916) he was transferred with a group sent to reinforce the 15th Battalion (perpetuated by the 48th Highlanders of Canada). He fought in the Battle of the Somme, where he was wounded, and later in the Battle of Amiens.
In World War II, Parnham re-enlisted with the Loyal Edmonton Regiment, which perpetuated the 51st Battalion but returned after one year due to illness. He was a founding member and secretary of the 51st Battalion Association.
He married Ellen Morrison on 15 Sep 1922. Ellen, born in Glasgow, Scotland, came to Canada in 1911 with her parents, eventually moving to Edmonton in 1920. Andrew and Ellen Parnham had two children, a daughter Laura (Mrs. H. L. Gibbons) and a son, Douglas. Andrew Parnham died 16 May 1977.

51st Battalion Association (1919-1975)
Lt. Col. Reginald de Lotbinere Harwood, formerly of the 101st Regiment (EdmontonFusiliers), was authorized to raise the 51st Battalion (Edmonton’s Own) in December 1914. In November 1915 the Battalion was the first unit to occupy the Edmonton Drill Hall (later known as the Prince of Wales Armouries, now known as the Prince of Wales Armouries Heritage Centre). Sixteen of the commissioned officers had risen through the ranks of the Fusiliers and some were veterans of the Boer war.
The 51st Battalion embarked for the European front as part of the Canadian Expeditionary Force (CEP) leaving Edmonton for Halifax by train on April 1, 1916. From Halifax, they travelled to Great Britain aboard the S.S. Olympic. In Britain the battalion was posted to the 12th Infantry Brigade of the 4th Division being organized at Bramshott Camp, but it was broken up to provide reinforcements for units already in action. Ultimately the 51st Battalion was perpetuated by The Edmonton Regiment (now the Loyal Edmonton Regiment (3 Batt. P.P.C.L.I).
The 51st Battalion Association was organized by veterans of the battalion. After its 60th anniversary banquet in April 1975 the association was disbanded. Andrew L. Parnham was acting secretary of the 51st Battalion Association at the time it was disbanded.

The material was arranged by the archivist by creator.
The photographs were assigned item numbers with the prefix EA-307 and arranged in chronological order.