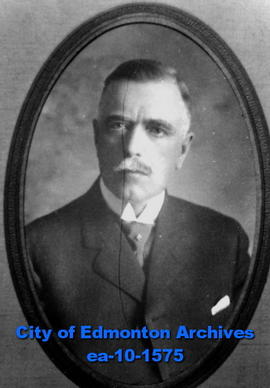 Alexander Naismith Mouat was born in Edinburgh, Scotland in 1862. He emigrated to Canada in 1882 and was employed in the audit department of the Canadian Pacific Railway Co. During the Northwest Rebellion, 1885, he served in the 90th Winnipeg Battalion of Rifles, which fought at Fish Creek and Batoche. From 1886 to 1906 he worked for the Hudson’s Bay Company, finishing as the company’s comptroller. At that time, he became a Justice of the Peace in Alberta.
Alexander became auditor for the City of Edmonton in 1913 and later became the City Comptroller. In 1917 he left the City of Edmonton to serve as the first Comptroller General for the Government of British Columbia, later also serving as the first Civil Service Commissioner. He retired due to ill health on 27 Mar 1929.
Alexander Naismith Mouat died 6 Jan 1950 in Victoria, B.C.

The textual record was originally included with Northern Alberta Pioneers and Old Timers Association fonds (EA-10-2573), but there is no documentation concerning its deposit in the Archives.

This fonds was donated to the City of Edmonton Archives by an unknown source, possibly a Mouat family member, via the Northern Alberta Pioneers’ and Old-Timers’ Association (NAPOTA). It is not known when the donation occurred.

The photograph was assigned an item number with the prefix EA-10.