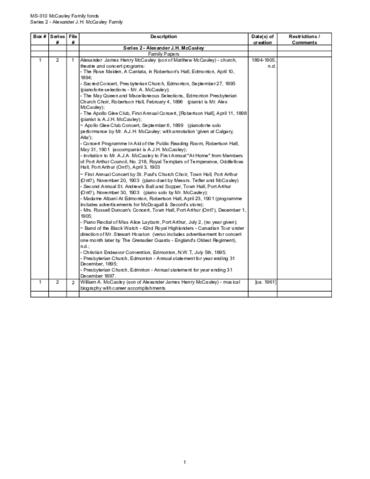 Alexander James Henry McCauley was born 1 Jul 1876 to Matilda Benson and Matthew McCauley in Winnipeg, Manitoba. At the age of 3 he moved to Fort Saskatchewan and later to Edmonton where his father homesteaded. Alex was very involved with the musical community in Edmonton, often performing as pianist or organist, including with the First Presbyterian Church Choir.

Alexander moved to Tofield, Alberta in 1907 to open a real estate and insurance office. He was an active part of the community in Tofield serving as mayor, as well as on the municipal school board, and in other community organizations.

William Alexander McCauley was born 14 Feb 1917 to Barbara Sinclair and Alexander J.H. McCauley. He started piano lessons at 6 yrs, and at 16 yrs he formed a dance orchestra that travelled around the Edmonton district and was broadcast on CFRN.

During World War II, he was made Assistant Bandmaster of the Toronto Manning Pool Band, but was later remustered to aircrew. He went on to become a pilot, then instructed on Harvard aircraft and received an Honorable discharge as a flying officer.

After the war, William returned to his musical career. He went on to become an accomplished pianist, composer, arranger, conductor and trombonist. A few of his many accomplishments include playing with the Toronto Conservatory Symphony, Ottawa Philharmonic Orchestra, the National Film Board Orchestra and the Toronto Summer Symphony. William worked as the Music Director for Crawley Films, and composed and conducted music for over 100 documentary films.

The series consists of records of Alexander J.H. McCauley, predominantly musical programmes, many of which list him as the pianist or accompanist. The other programmes where he is not listed, it is presumed these were concerts or performances that Alexander attended.

The series also includes a musical biography of Alexander’s son, William A. McCauley.

The series was donated to the City of Edmonton Archives by Margaret Wood in 1981 and Elizabeth Aylen in 1989.