Eliza Ann Craig was born about 1867 in Liverpool, England and was an associate of the Royal Academy of Music in London. In 1901, she married Thomas Winslow Hamilton and they had three children, George, Robert Winslow, and Mary (Maisie). After moving to Edmonton with her husband and family in 1913, she became prominent in local music circles, including the Alberta Music Teachers' Association, the Alberta Musical Festival Association and the Women's Musical Club of Edmonton, of which she was the President from 1942 to 1944. Eliza Craig Hamilton died 10 Jan 1947.

Mary (Maisie) Adelina Hamilton was born in Ireland to Eliza Ann Craig and Thomas Winslow Hamilton around 1903. She immigrated to Canada with her parents and siblings in 1913. She began working for the provincial government in 1924 and in 1942 became an Inspector for the Board of Industrial Relations. She continued in the position until 1967. She also served on the City Archives and Landmarks Committee from 1953 to 1959, and was actively involved in the Historical Society of Alberta. Mary (Maisie) Adelina Hamilton died 16 Apr 1980.

Robert Winslow Hamilton was born in England in 1911 to Eliza Ann Craig and Thomas Winslow Hamilton. He immigrated to Canada with his parents and siblings in 1913. Robert graduated from the University of Alberta in 1931, served as a city alderman from 1943 to 1945, ran for mayor in 1945 (unsuccessfully), and was a member and President of the Edmonton Club. Robert Winslow Hamilton died in the airplane crash of Canadian North Star Flight 810 that crashed into Mount Slesse near Chilliwach B.C. on 9 Dec 1956.

Harold O. Ross was born 24 Feb 1890 to Isabella Parsons and Albert Ross in Birkenhead, Cheshire, England. Harold, along with his parents and sister Dorothy, immigrated to Canada in 1905, settling in Brandon, Manitoba. Then Harold joined the 19th Alberta Dragoons in Calgary and then the 11th C.A.S.C. (Canadian Army Service Corps).

Winnifred Thompson was born 1 Aug 1886 to Zelia Taylor and George Thompson in Germania, Ontario, which is in the Muskoka area, near Bracebridge. In 1904 she graduated from business college and went west looking for adventure, landing work in grain marketing with the Winnipeg Grain Exchange.

By 1909, Winnifred and Harold had met and were courting while she was in Winnipeg and he was in Calgary.

In 1911 Harold O. Ross married Winnifred Thompson in Calgary. They had one daughter, Jeane Alberta. The family settled in Edmonton, where Harold worked as a clerk in the Survey Branch of the Public Works Department for the Province of Alberta. He was working for the Province at the time when both the Alberta Legislature Building and the High Level Bridge were being built. The couple first lived at 2261 First St. (now known as 101 Street), then 630 Eighth Street (now known as 108 Street). In 1913, they had a house built in the then-newly-developing Windsor Park area in Edmonton at 8404 – 118 Street. Their daughter was born in the house a year later.

Harold joined the 222nd Batt. Canadian Expeditionary Force in January 1916 as a Lieutenant, enlisting in Brandon, Manitoba. He sailed to Europe in November 1916 aboard the ‘Olympic’. The Battalion was merged into the 44th Battalion (Manitoba Regt.) C.E.F. in France. At this point, Winnifred and Jeane were living in Bracebridge, Ontario.

Harold Osbourne Ross was killed in action in France on 9 May 1917.

After her husband’s death, Winnifred and Jeane returned to Alberta, settling on a farm in Millet, just south of Edmonton. Winnifred owned and ran the farm with her brothers, Wilfred and Keith Thompson. They were soon joined by brothers Hector and Carl. The Ross-Thompson farm began as a mixed farm, eventually becoming a dairy farm operation that lasted for decades until being sold in 1967.

Winnifred was very active in the local community with interests in agriculture and rural schooling. She served in the United Farm Women for over 25 years in various roles, including provincial director, provincial vice-president and provincial president. Winnifred was appointed to the Board of Governors of the University of Alberta in 1948 and served until 1954. She was also active in the Alberta Federation of Agriculture, the Canadian Federation of Agriculture, the Alberta Council on Child and Family Welfare, and the Board of Industrial Relations. Winnifred was elected to the Agriculture Hall of Fame in October 1974. 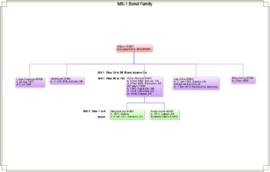 Jasper Peter Johnston was born in 1875 in Ontario to Benjamin Johnston and Mary Ann Haviland. By 1911 he was a medical doctor in Canmore, Alberta. That same year he married Lillian Charlotte Weir in Banff. They had two children, Pauline and Benjamin. The family moved to Edmonton where Dr. Jasper P. Johnston had a medical practice from ca. 1914-1948].

Jasper P. Johnston died in 1954 in Edmonton and is buried at Westlawn Memorial Gardens in Edmonton. It is not known when Lillian Weir Johnston died.
Daughter Pauline Johnston was a school teacher and taught in the Elk Point district around 1934.