With a television audience of an estimated 177 million viewers, the 1996 World Figure Skating Championships was the largest international sporting event held in Edmonton since at least the 1978 Commonwealth Games. In addition to the approximately 220 athletes and 600-700 international media, the local organising committee expected that there would be 15-20,000 visitors to Edmonton during the week of March 17 to 24, with an economic spin-off of approximately $50 million.|The effort to bring the World Championships to Edmonton began soon after Halifax hosted the 1990 World Championships, when local skating supporters proposed to the Canadian Figure Skating Association (CFSA) that Edmonton be the next Canadian city to host the event. Once the Edmonton organising committee, a voluntary body chaired by Don Sprague, won the endorsement of the CFSA, it was only a matter of time before the city would host the World Championships. Nevertheless, it was still up to the International Skating Union (ISU) to decide when Canada would be next in the rotation. Though the Edmonton committee bid for the 1994 and 1995 Worlds, it was really interested in 1996: it was a non-Olympic year, but skaters were beginning to gear up for the next Olympics. Because Edmonton had been selected to host the 1994 Canadian Championships in anticipation of hosting the worlds, it was no real surprise when, in 1993, the ISU finally announced that the city would host the 1996 World Figure Skating Championships. The CFSA and the ISU saw the Canadian championships as an opportunity for the city and the organising committee to test their plans, work out the bugs, and identify potential problems and opportunities.|Following the 1994 Olympics, the popularity of international figure skating had skyrocketed to the extent that the scale of the World Championships was to far exceed what the Edmonton committee or the CFSA expected when they began the bid process for the event in 1990. Therefore, the local organising committee had little precedent to guide their planning. Building on their experience with the 1994 Canadian Championships, the local organising committee designed the event as a huge festival to showcase both skating and the city. The demand for tickets was phenomenal, with the main events selling out in 72 hours, a full year before the event. In order to keep up with this demand, the committee organised associated activities throughout the city, with the main focus of the events remaining downtown and at Northlands. The skating competition added to the excitement. Canadian Elvis Stojko was heavily favoured to win the men's championship on home-soil, and the women's event still had a tint of scandal associated with it. Once the championships ended, Edmonton had set attendance records for the worlds and was widely credited with staging excellent World Championships.

The Acme Company was incorporated by the Revillon family in 1906. H.M.E. Evans spent time as a financial administrator for the Revillon family of France and one component of this arrangement was the Acme Company Limited. The company was to have wide ranging powers, touching upon many aspects of the retail business. However, with a declining market in Edmonton, the company dropped its retail branch and concentrated totally on building rentals and the investment business.

The Administrative Management Society or AMS was founded in 1919 and originally called the National Association of Office Managers or NAOM. The name was changed in May 1929 to National Office Management Association or NOMA, with chapters in the USA, Canada and the West Indies. The aim is to provide education and networking opportunities for office managers. The Edmonton Chapter of NOMA petitioned for a charter February 28, 1949 and it was granted the next month. February 1, 1964 the name of NOMA was officially changed to Administrative Management Society.

The AIDS Network of Edmonton Society, founded by Michael Phair and five others, was incorporated as a non-profit society in 1984. The Society was formed to respond to the growing number of AIDS related diseases being diagnosed amongst the gay community world-wide and the first identified case of AIDS (for a man named Ross Armstrong) in Edmonton. The Society’s mandate was to offer support to individuals with AIDS and ARC (Aids Related Complex), as well as provide education for the general public and high risk groups, and liaise with other agencies and institutions. The Network utilized the services of a large corps of trained volunteers, who were involved with support groups, individual counselling, and a befriending program.
A large part of the Society’s efforts, once charitable status was granted, involved fundraising, and numerous benefits and charity events centered on the goal of raising monies for the Society and its work. Money from fundraising went to producing informational pamphlets and overheads for slides, and acquiring office space for the AIDS Network. The AIDS Network established GMOC (Gay Men’s Outreach Committee) ca. 1991 as a peer education project for gay and bisexual men, with the stated goal of being “positive role models for gay or bisexual men and to support them in making healthy lifestyle choices”. (Folder 23). In 1999, the AIDS Network of Edmonton changed its name to HIV Edmonton, and its work is ongoing.

Harry Ainlay was born in Brussels, Ontario in 1887. After earning a teacher’s certificate, he came to Alberta in 1907, spending time around Stavely before moving to Edmonton in 1912. After several years in real estate, Harry Ainlay returned to teaching in 1920, working at Queen Alexandra High School, Garneau High School, and Strathcona High School.

Apart from municipal politics, Harry Ainlay ran a number of unsuccessful Provincial campaigns in both Alberta and British Columbia, under the Co-operative Commonwealth Federation. He was also involved in the Yellowhead Route Association in the 1940s and 1950s. 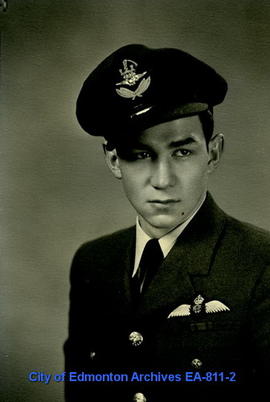